The Lost Painting: The Quest for a Caravaggio Masterpiece by Jonathan Harr (♦♦♦♦) 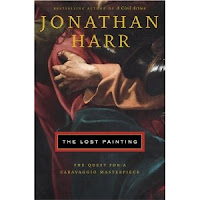 I enjoyed this book very much; it took me two days to read it. The story flows easily as if it were a book of fiction, but as it turns out it is based in real life. Caravaggio, one of the Great Masters in the history of art, lived a short life, by today’s standards, but enjoyed fame and fortune in his day, thanks to secular, wealthy patrons and commissions of religious authorities to depict religious themes in his paintings. One in particular, “The Taking of Christ”, also known as the “Betrayal of Christ by Judas”, was part of a collection that belonged to the Mattei family and that got lost through the centuries. The painting had an interesting history since the Mattei family lost its fortune and was forced to sell its estate. The picture was sold to a Scottish for one amount and its cost noted for another amount to avoid tax penalties when taking the painting out of Rome. Sloppy accountants reported the painting under the authorship of Honthorst, so it was missing and mislabeled for about two centuries until Sergio Benedetti, one of the art restorers at the National Gallery of Ireland, discovered it in Dublin in the summer of 1990, among a stack of paintings in a Jesuit religious home.


If you like to read about art history, and even if you don’t know anything about it, you’ll like this book!
books reviews Jonathan Harr Nonfiction books