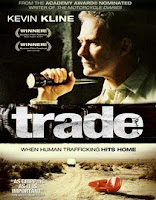 I just finished watching this movie and must say it was shocking almost from the very beginning until the end; not in the visually striking or awesome kind of way, but because of the reality of the subject covered. It is so utterly brutal and the same time real that makes one wonder how it’s possible that those things happen in today’s world.

The topic of this film is human trafficking. The movie starts with Adriana, a thirteen year-old Mexican girl, celebrating her birthday. Her brother Jorge crashes the party and brings with him a bike as a present for his sister. Their mother opposes the gift, but Jorge leaves it and goes out with friends. The next morning Adriana leaves the house, riding her bike, and is kidnapped in the street without any apparent witness. The rest of the movie is divided between the quest of the traffickers to deliver their cargo, and Jorge and a policeman friend (Kevin Kline) riding their car in a race against time to get to New Jersey where Adriana will ultimately be sold in an auction as a sex slave. If you’re not queasy about these type of movies then watch it, I strongly recommend it.
human trafficking Kevin Kline movies reviews