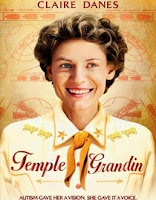 This movie made for HBO television, covers the topic of autism in a very tender way. Temple Grandin (Claire Danes in an Emmy winning performance), an autistic savant, is diagnosed with autism at age four. Learned to speak at age four thanks to her mother’s unwavering support and dedication; later on, a science teacher in middle and high school recognized her amazing ability to see things differently and encouraged her to develop her scientific mind. After spending a summer at her aunt’s ranch in Texas, she began to observe and understand cattle behavior, which led her to develop a machine that was able to simulate the effect that hugging have on most people. Temple went to college and had to fight against the misunderstandings associated with her condition, but graduated at the top of her class and went on to obtain a Master in Animal Science. Her articles on animal behavior and her inventions to improve the treatment of livestock to make the process as humane as possible have made her a recognized expert. Today she teaches courses at university level.

I always enjoy Claire Danes performances; they’re something like guilty pleasure, but I would say that this is one of the most vibrant performances that I have seen from her, unexpected too, because she is typically the sweet, innocent girl, who meets a certain fate, not in this movie! Danes is inspiring as Temple Grandin, and from what I saw during the Emmy ceremony to which the real Temple Grandin was invited, she was spot on since she looked exactly as the title character does in real life. Julia Ormond, as her mother, also delivered a moving performance.

I also liked the way the movie covered the topic of autism; it obviously presented Temple’s perspective since the movie was about her, but it also shines a light on the frustration of family members for not being able to connect with the person suffering from that illness and the pain that the person feels for being misunderstood.
autism Claire Danes HBO movies Julia Ormond movies made for TV movies reviews Temple Grandin