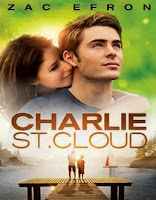 Charlie St. Cloud, the titled character, ably interpreted by Zac Efron, is unable to let go of his dead little brother, even five years after the accident that took him away. In that accident, Charlie was brought from the dead by a paramedic who refused to let him go. Five years later, Charlie has pretty much given up on life, except for meeting his brother at sunset for baseball practice. When a young woman with similar life experiences starts getting too close, Charlie must decide whether to look ahead or stay in the past.
To be honest, this movie took me by surprise. I was expecting a so-so performance by Zac Efron considering his very pretty face, but with this film he proves he has acting chops. The movie delivered painful blows to my heart in more than one occasion, such as when the fatal accident took place. This is more than a love story or a ghost story; it is about facing life head-on and accepting that sometimes second chances are given for a reason. Lovely movie!
movies reviews Zac Efron