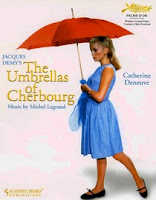 The Umbrellas of Cherbourg (♦♦♦♦), French
Beautiful umbrella store clerk Genevieve (Catherine Deneuve) falls in love with Guy, an auto mechanic, and plans to wed as soon as possible, but their young love is cut short when he is drafted into the army and her mother forces Genevieve to marry a wealthy man.
Beautiful music by Michel Legrand and poignant storyline make this movie a classic! The ending is so emotional!

Yesterday (♦♦♦♦), Africa
Yesterday has been feeling ill for a while but has to cover a great distance on foot to visit a doctor in the nearest village. After incredible sacrifices, she finally sees a doctor who diagnoses her with AIDS. When she goes to the city to tell her husband—where he is working--that he is possibly infected as well, he beats her up monstrously believing she has been unfaithful. Months after, her husband comes back home when he starts feeling very ill with AIDS and he knows his end is near. Yesterday takes care of her dying husband, all the while trying to be discreet so people in the village don’t find out what her husband is sick with. He dies, and she knows her end is near as well, but she is determined to see her daughter’s first day of school, and after that she can die in peace.
Awfully sad but inspiring at the same time!

Farinelli (♦♦♦♦), Italian
Farinelli was castrated when he was a young boy, as it used to be the custom, to preserve his angelic voice. As a man, he interpreted the melodies that his brother composed, all the while sharing everything, even their women. But when musical genius Handel makes him realize that he is meant for something greater, he starts to question his alliances and relationships with the ones closest to him.
There are several sexual scenes in the movie, but they complement the storyline. Good movie! 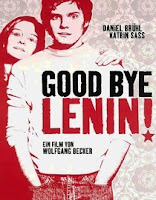 Good Bye, Lenin (♦♦♦♦), German
Alex’s mother was in coma just before the fall of the Berlin Wall, but when she wakes up, doctors tell him that her heart is too weak to withstand shock, so they go on pretending Germany is still under communist rule.
This movie is funny, but in a sad way, if that’s possible. It’s funny to see how Alex goes around Germany looking for food products that no longer exist to masquerade them as store-bought; he also brings a choir of children dressed in uniforms to sing for his mother. One can appreciate it more if one has lived through those political changes. 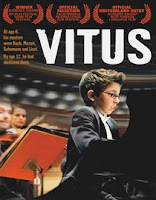 Vitus (♦♦♦♦), German
Young Vitus is a musical prodigy, but he is missing the best of his childhood due to his parents’ high expectations. Willing to become a normal child, Vitus pretends to have lost his incredible ability for learning to get his parents off his back.
It is very refreshing to see how Vitus becomes a “normal” child, all the while making his family financially secure for life. 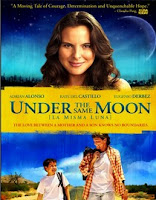 Under the Same Moon (♦♦♦♦), Mexican
Rosario, an illegal worker in the United States, constantly calls her son Carlitos, who lives with relatives in Mexico, to keep in touch, but when Carlitos’ grandmother dies and Rosario stops calling, he embarks on a journey to cross the US-Mexican border and reunite with his mother. Along the way he will find a Good Samaritan who risks being deported so Carlitos can find his mother.
Even if you don’t agree politically with the topic covered by this movie, you will find it very emotional with tearful ending!
best foreign movies foreign movies movies reviews