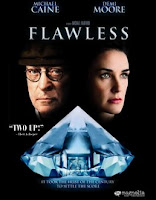 A British janitor (Michael Caine) of London Diamond Corp convinces an American female executive (Demi Moore) to carry out a heist in the very company where they both work. He is a disgruntled employee upset because the company refused to cover his wife’s medical expenses. She is one of the few female executives in 1960 Britain, passed over several times for promotion. Both of them seem to start up the heist with the same idea: to rob as many diamonds as can fit in a thermos; the robbery ends up being quite a surprise for the American when she discovers that all the diamonds the company had in store, have been stolen.
Great performances delivered by both Michael Caine and Demi Moore.
Demi Moore heist movies Michael Caine movies reviews