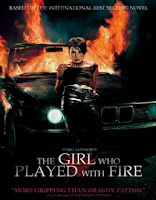 A sex trade scandal involving prominent Swedish characters is the focus of the investigation of a female Ph D. candidate and her aspiring journalist male friend. Millennium Magazine decides to publish the story, but in the process of confronting some of the key players, Mikael Blomkvist finds the aspiring journalist and his friend murdered. The parallel murder of Lisbeth’s legal guardian with the same pistol, which is imprinted with Lisbeth’s fingerprints, leads the police to pinpoint Lisbeth as the main suspect for the triple murder. Mikael Blomkvist believes in Lisbeth’s innocence and won’t rest until he proves it. In the process, Lisbeth will face more violence coming from men wanting to kill her and will have to come to terms with events and people she had thought were gone for good.

This movie is also graphic, but less so than part one. The story is engaging and the acting is as convincing as it was in The Girl with the Dragon Tattoo. In this second installment, some of the key characters that we came to know in the first movie remain, played by the same actors. This time, Lisbeth’s past as well her present life are explored more deeply than in the first movie.