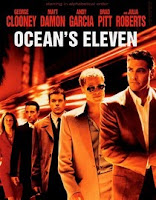 When Danny Ocean (George Clooney) went to jail the time before last, his wife Tess (Julia Roberts) left him and went to work as a gallery curator for Terry Benedict (Andy Garcia), the owner of three of Vegas’ most famous casinos. Once out of jail, Danny assembles a team with the best and brightest of the thievery world and, on a boxing fight night, carries out a flawless heist on the Bellagio’s vault, which contains the riches of that and two other major casinos. Never mind that those casinos are controlled by no other than Terry Benedict, the man who is currently dating his wife, but maybe getting even makes the theft even more satisfying.

I loved the stylish heist in this movie, even more so because they didn’t have to kill anyone to get the money. The entire cast was charismatic and lovable. I dare to say they felt they were playing rather than working, reason why they went on to film two other motion pictures in the franchise. I didn’t like Ocean’s Twelve or Ocean’s Thirteen as much as Eleven, though the same elements of the first movie remain.
Brad Pitt George Clooney heist movies movies reviews