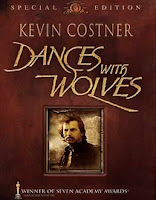 Dances with Wolves is the name given by a Sioux tribe to John Dunbar, a Civil War lieutenant who gets assigned to guard a military post in the last American frontier. In the middle of nowhere, Dunbar befriends a wolf, which he nicknames Two Socks, and later befriends the neighboring Sioux tribe, falling in love with one of their adopted daughters and marrying her.

This movie is Kevin Costner’s directorial debut, and he surely chose a grand topic for it. Filmed almost in its entirety at outside locations, it features the vast magnificence of the American West. Dunbar’s friendship with the ever watching wolf is a testament of the endurance of the human spirit under trying circumstances. The movie treats the subject of the conquest of Indian territories with intelligence and finesse. There are no apparent stereotypes in this film: the white man has superiority in numbers, but the Indians are willing to meet them halfway. Unlike most movies about Indians, they’re not depicted as uncultured savages; their customs fit nicely into the story line. The Indians play no tricks in this movie; they are a culture in decline, they know it and are willing to fight until their last breaths to preserve their way of life.

This film is a classic without a doubt. Watch it; you won’t regret it!
best picture movies Kevin Costner movies on Native Americans movies reviews