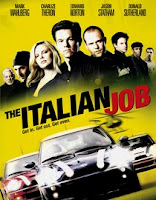 Charlie Croker (Mark Wahlberg), a mastermind plotter, and John Bridger (Donald Sutherland), a gifted safecracker, joined by four other highly skilled thieves, execute a perfect heist in the picturesque city of Venice. What can possibly go wrong? Everything! Steve (Edward Norton), one of the gang members, double crosses the rest of them, walking out with a bounty of $35 million dollars worth in gold. He kills Bridger and assumes Charlie and the others are dead too, but that’s his first mistake. One year later, Charlie meets with the other three gang members and recruits Stella, John Bridger’s daughter, also a professional safecracker, to avenge Bridger’s death and recover the bounty. Easier said than done! However, Charlie and the others, thanks to Steve’s distrust of people, manage to carry out the heist as it was done in Venice.

Mini cooper races, major traffic jams, and good acting enhance the tension in this thriller. My heart kept pounding in my chest until the end. Great movie! I wish there were more like this one.
2003 movies Charlize Theron Edward Norton heist movies Jason Strathan Mark Wahlberg movies reviews