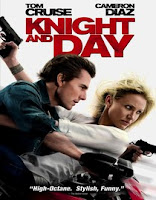 At the airport, on her way to her sister’s wedding, June (Cameron Diaz) bumps twice into a handsome stranger (Roy, Tom Cruise). What are the odds? Supposedly, she can’t use the ticket that she just bought because the flight is full; however, she manages to get on board and realizes that there are only few people traveling. She strikes a conversation with Roy, decides to make her move on him, and that’s when things start to get strange and complicated. Several dead people and a crash landing later, she wakes up in her house as if nothing had happened, but everything starts to fall apart when federal agents appear to pick her up.

I do like Tom Cruise acting. I’m probably one of the few people who say that, but with this movie I would likely ask for a refund of my time and money, if those were allowed. What can I say about this film? It is all about explosions, chases, secret agents of even more secret agencies, all in the name of a battery that is “the biggest energy source since the sun,” and that’s one of the most unbelievable lines in this erratic movie.

I always wondered about Tom Cruise not making out with co-stars in the movies he stars in, well, that modesty, if that’s what it is, is thrown to the wind here; he kisses Cameron Diaz repeatedly, but so coldly, that it’s impossible to buy that they may actually like each other. I only chuckled twice in two hours and those were the times when Cameron Diaz realizes she is wearing a bikini that she didn’t put on herself; the other time was the ending because she told him the same line he had used with her.

I didn’t hate this movie, or loved it. I just didn’t care and that’s the reasoning behind the three stars.
2010 movies action films Cameron Diaz movies reviews Tom Cruise