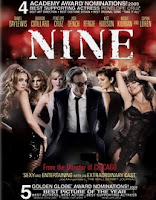 Nine is a Broadway musical brought to the big screen by director Rob Marshall (Chicago). It is based on the life and work of Italian film director Guido Contini (Daniel Day-Lewis), and his relationship with the women who inspired his work, among them Luisa (Marion Cotillard), his wife, Carla (Penelope Cruz), his mistress, Claudia (Nicole Kidman), his muse and leading actress in most of his films, Lilli (Judi Dench), costume designer and closest friend, his mother (Sophia Loren), Sereghina (Fergie), the woman Guido and his friends used to pay for sexual advice when growing up, and Stephanie (Kate Hudson), the editor of Vogue magazine.

Each one of the main characters, namely Guido and the women, sing at least once; Marion Cotillard’s numbers are poignant due to the fragile state of the relationship between her and her husband. However, the most attractive and spirited singing number in the whole movie is sung by Fergie with Be Italian; she truly displays her talent with this piece. Sexy costumes and great performances by the whole cast make this movie worth seen again and again.
Daniel Day-Lewis Kate Hudson Marion Cotillard movie musicals movies reviews Nicole Kidman Penelope Cruz