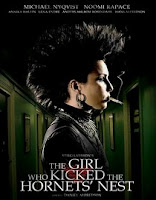 If you have been following the story, you probably know that in the previous installment Lisbeth went to confront her father and found out, among other things, that she had a half-brother. Both, her father and half-brother, shot Lisbeth and buried her.

In the third and final installment of the “Millennium Trilogy”, Lisbeth Salander faces a charge for attempting to murder her father, a former Russian spy named Alexander Salachenko. The intelligence community won’t allow, if they can help it, Lisbeth’s life story to be revealed, which Millennium Magazine intends to uncover in a special issue dedicated to Lisbeth. Mikael Blomkvist is determined to expose the injustices that authorities have committed against Lisbeth, all for protecting the identity of her father.

I must say that this is a nice ending to the trilogy. The acting is as good as in the previous movies. The characters that we already know are still there, but complemented by new characters that support the storyline. The violence in this movie takes place in the form of flashbacks, unlike the previous two films.

Overall, I was satisfied with the ending. As I have said before, these movies are not meant to be enjoyed, but to make you think, and in that level this trilogy is deeply satisfying.
foreign movies Lisbeth Salander Mikael Blomkvist movies reviews Swedish movies The Millennium Trilogy