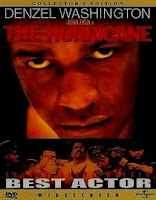 In 1963, Rubin “Hurricane” Carter (Denzel Washington) was at the pinnacle of his boxing glory and he had a loving family. All was taken away in one night when he was accused and convicted to three life sentences for three homicides he did not commit. Police officials bent the truth, forged documents, coerced some witnesses and made others recant their testimony, all to put Rubin Carter behind bars. At fifty years old, Carter had spent 20 years fighting his case and being defeated in court. Then, with the help of a high school student inspired by Carter’s autobiography, which he wrote in prison, and three Canadian activists, important evidence was uncovered which led Carter to petition his lawyers to try his case in a federal court, where he was finally absolved.

This is one magnificent performance by Denzel Washington for which he rightly received an Academy Award nomination; it isn’t however the best performance I have seen from him. I think that he was perfectly corrupt and equally evil in both Training Day and American Gangster. I particularly enjoyed the scenes where he was in the isolation cell for ninety days and he started to fight with his three personas, one of whom was full of hatred, namely “The Hurricane”.