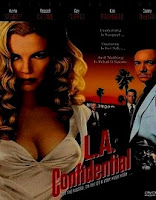 In 1950s Los Angeles Police Department there are all types of policemen: those like Jack Vincennes (Kevin Spacey), who feed stories to paparazzi in exchange for money and fame; those like Bud White (Russell Crowe), who have a short-fuse but also a good heart, often used by his superiors as a “muscle”, but with enough brain to become a homicide detective if given the chance; then there are those like Edmund Exley (Guy Pearce), politics-savvy, willing to make a name despite his idealism…And the crooked ones, who think they can get away with anything.

When several people are violently murdered in a diner, LAPD appear to solve the crime rather swiftly, but all is not as it seems... Stolen drugs, a prostitution ring with movie stars look-alikes as hookers, politicians and corrupt cops, collide to provide clues for solving the diner’s murders.

I wasn’t crazy about this movie despite its all-star cast. I have seen some of those characters before, played by the same actors. The ensemble cast works rather well, but none of the individual performances is mesmerizing. This is a nice whodunit, but a bit confusing if are not paying close attention.
Guy Pearce Kevin Spacey Kim Bassinger movies reviews Russell Crowe