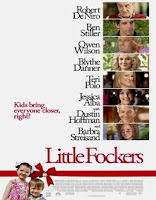 Pam (Teri Polo) and Greg (Ben Stiller) have been married for a few years, they have twin children and apparently the never-ending distrust of Jack (Robert De Niro), Greg’s father-in-law, seems to be vanishing. That is, until the twins are about to celebrate their fifth birthday and the in-laws come to visit. Kevin (Owen Wilson), Pam’s ex-boyfriend, also makes an appearance when his engagement is off. Suddenly, everything conspires to create problems. Greg gets an offer from a pharmaceutical salesperson, conveniently a young, beautiful woman (Jessica Alba), to speak at a medical conference where he becomes a sensation. Greg’s apparent straying fuels Jack’s suspicions and this time he is firm on getting Pam and Kevin back together.

Before watching this movie, I had read a bad review but I didn’t want to listen. Shame on me! This movie is a complete waste of time. They have brought onboard actors who are not funny, and even the jokes of the veterans in the franchise no longer work. Robert De Niro is grumpier than usual, although this time he feels that he doesn’t have much time left to live, so apparently his long face is justified. I hope this is the last installment in the series.
2010 movies Ben Stiller movies reviews Owen Wilson Robert De Niro Teri Polo