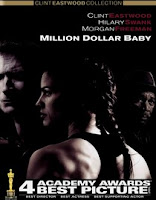 Frankie Dunn (Clint Eastwood) is a seasoned boxing trainer, cautious by nature, trying unsuccessfully to reconnect with his estranged daughter. His chance, to forgive himself for whatever bad deeds he may have done in the past, comes along when an aficionado fighter named Maggie Fitzgerald (Hilary Swank) arrives at his gym, and asks him to be his trainer. “I don’t train girls”, Frankie says, but Maggie’s tenacity eventually wins him over. Maggie begins winning fights by knockout in the first rounds, and Frankie is left to figure out how to get her more fights since everyone refuses to fight her; so she is moved up a division, and that does the trick. Maggie faces rivals in Europe, and when she comes back to the States her reputation precedes her. It is then that her big opportunity to win a Championship Belt comes by facing “The Blue Bear”, an ex-prostitute from Eastern Europe, famous for fighting dirty.

Shadows contribute to enhance the drama in this movie, and so does the original music score. Morgan Freeman’s voice over is a special treat, because it enhances the drama as well. Clint Eastwood is superb, as always, as both actor and director; Morgan Freeman, as Scraps, a former boxer left blind in his last fight, also shines as always. Although this movie is usually described as a tearjerker, it didn’t have that effect on me; I don’t know if it was because I had read so much about the movie before seen it.

I got the impression that Hilary Swank didn’t deserve this Oscar, despite being a good performance; it was good but it wasn’t unforgettable, unlike Annette Bening’s performance that same year in “Being Julia”.
boxing movies Clint Eastwood Hilary Swank Morgan Freeman movies reviews sport movies