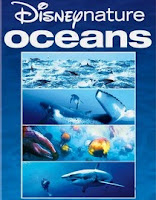 Oceans is a feature-length Disneynature film that details the lives of creatures big and small in all the seas around the world. But aside from its entertaining value, Oceans has the mission to teach its audience and plead for a better care of the environment.

Oceans is smoothly narrated by Pierce Brosnan. The music is lovely and it coordinates with the movement of animals throughout the film. As it is expected from a Disney production, the dynamics of prey and predator are not explored fully; they just barely scratch the surface, but if they had done so they would have scare rather than please. Some scenes are pretty cool, such as the one where a diver is swimming next to a great white shark.