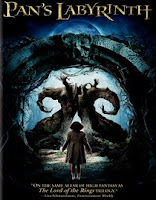 Princess Moana, the daughter of the King of the underworld, escaped from her kingdom to the realms of the humans and died there. Her father has awaited her return ever since, reincarnated in another human body…

Spain, 1944. The Spanish Civil War has concluded, but small groups of resistance fighters still remain hidden in the forests, aided by fellow countrymen. Young Ofelia (Ivana Baquero) moves with her mother to the countryside to live with her newly minted stepfather, who is no other than Captain Vidal (Sergi Lopez), a man without scruples. Ofelia dreads the place, but finds solace on fairy tales that start coming alive. A fairy guides Ofelia to Pan’s labyrinth, where the faun gives her a book that contains instructions to three trials that she is supposed to pass to prove that she is princess Moana reincarnated.

Fantasy and gruesome reality entwine during the course of this movie. The Spanish soldiers torture resistance fighters, there is euthanasia practiced by a doctor, Ofelia’s mother dies on childbirth. Ofelia, who has been abandoned by the faun for not obeying his instructions, is given one last chance to prove her worth: she must bring her newborn brother to the faun to offer him as sacrifice. Will she do what she was asked? What will Captain Vidal do?