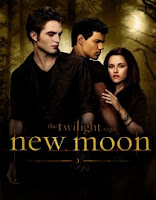 In this second installment of the Twilight Saga, Bella Swan (Kristen Stewart) goes to the Cullens’ house to celebrate her birthday and she cuts herself, prompting Jasper to go crazy for her blood. In an attempt to save her, Edward (Robert Pattison) pushes her aside, but with so much force that she is thrown against a wall and when she lands, she gets a gash on her arm. Oh, boy! Edward realizes that he and his clan are endangering Bella, so he makes the choice to lie to her and leave her.

Upon Edward’s leaving, Bella falls into a depression and increasingly avoids friends. Quite by accident she discovers that she can conjure Edward’s image every time she is in danger, so she starts getting into high adrenaline situations more often. Bella takes motorcycling as a pastime, and that’s how she comes to hang out with Jacob (Taylor Lautner). Jacob’s company, she realizes, makes her forget her pain; he makes her feel alive. That is, until Jacob starts avoiding her and starts hanging out with Sam and his friends.

Jacob has a secret now, but he’s unable to reveal it because it doesn’t belong to him. When Bella goes to confront Jacob for avoiding her, she ends up discovering that he is a werewolf! She is sweet for monsters! Meanwhile, Victoria, the redheaded vampire whose lover was killed by Edward, is fresh on Bella’s track, which prompts Jacob and his pack of werewolves to keep their eyes opened.

When Bella jumps from a cliff towards the sea, Alice has a vision but is not able to foresee the outcome; therefore, she assumes that Bella is dead. Edward learns of this and goes to the Volturi family, ready to die but they turn him down because his powers are too valuable. Instead, Edward decides to show himself to the humans at St. Mark’s festival in Volterra, and what happens next you’ll have to watch the movie to find out…

I did enjoy this second movie better than the first. There are several subplots parallel to Bella’s so the movie doesn’t bore you. The special effects are cool too, and the actors appear to be more comfortable in their roles as well. I particularly liked the colorfulness of the Volturi family: different villains, each one with their unique set of skills. I also loved the ending song “White Demon Love Song”.
Bella Swan Edward Cullen Kristen Stewart movies reviews Robert Pattison Taylor Lautner teen movies Twilight Saga