You Don’t Know Jack: The Life and Deaths of Jack Kevorkian (♦♦♦♦) 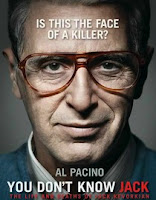 In this movie made for HBO television, stars Al Pacino as Dr. Jack Kevorkian, the physician that made waves in the nineties due to his assisting about 130 patients to commit suicide by administering a fatal combination of drugs via a machine. Dr. Kevorkian was put on trial five times and acquitted due to loops in the legal system, but he managed to bring to national attention the topic of euthanasia and the rights of terminally ill patients to decide when to end their journeys. Finally, in an attempt to plead his case in front of the Supreme Court, he assisted directly in the death of his last patient, was brought to justice for second degree murder and convicted on the basis of having had a disregard for law and having acted above it.

This was an Emmy-winning performance by Al Pacino, and well deserved; not only did he physically resemble Dr. Kevorkian, but his drive and dark sense of humor made me endure this movie despite its morbid topic. Susan Sarandon and John Goodman’s performances are also dead on.

You may agree or disagree in this debate, but the movie is certainly worth watching!
Al Pacino Dr. Jack Kevorkian HBO movies John Goodman movies made for TV movies reviews Susan Sarandon