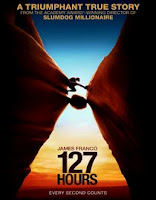 In a story taken from the news, Aron Ralston (James Franco), a passionate mountain climber, gets his hand trapped accidentally between a loose boulder and a canyon wall, while hiking in Utah. Four days later, he is still trapped, has lost circulation of his arm, is almost losing his battle to stay alive and takes the horrific decision to cut his arm to save himself.

This is a magnificent performance by James Franco; it’s too bad that Colin Firth will beat him at the Oscars this year. The movie is fast pace, despite Franco spending almost two hours of it trapped and fighting for survival. The split in three screen helps to give different perspectives of the same situation. His memories offer variety and aid in the understanding of the psychology of Franco’s character. Despite its harrowing conclusion, the film manages to be both uplifting and inspiring. God, it takes guts to make the decisions that Ralston made under duress!
2010 movies Aron Ralston James Franco movies reviews