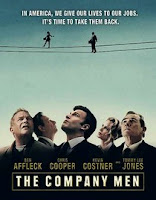 Bobby Walker (Ben Affleck) thinks he got the raw end of the deal when his big company laid him off from an executive job after working there for several years. The worst was yet to come; even the best friend (Tommy Lee Jones) of the company’s president got laid off by none other than his lover (Maria Bello). At risk of losing everything he had worked for his entire working life, Bobby asked his brother-in-law (Kevin Costner) for a job as a construction worker. Chris Cooper also co-stars.

This movie is sad, brutal and realistic all at once. In spite of it, I did like it. I think it was a serious attempt to depict what millions of Americans have lived through this latest recession. It’s true that the lives of the executives may not be most representative of the challenges faced by common citizens under duress, but think about it…When you earn a big salary your debts and financial obligations are magnified because you believe you can afford it; then one day your job is taken away and your way of life is gone. Not to be missed!
2010 movies Ben Affleck Chris Cooper indie movies Kevin Costner Maria Bello movies reviews recession movies Tommy Lee Jones