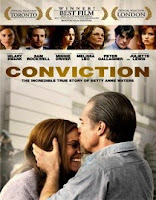 Betty Ann Waters (Hilary Swank) was a high school drop-out waitress, who got her GED and put herself through law school to represent her brother Kenneth (Sam Rockwell) in an appeal for the crime he had been wrongfully convicted of. Through 18 years, Betty Ann never stopped believing in her brother’s innocence, and she finally obtained his absolution with the aid of modern science (DNA testing).

The movie has its moments, but the acting isn’t great. Despite being based on a true story, Hollywood has explored and exploited the topic so much that there’s nothing new to say; only the characters are different.
2010 movies Hilary Swank movies reviews Sam Rockwell