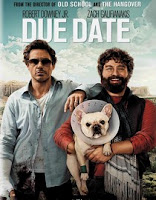 Peter (Robert Downey Jr.), an architect from L.A., has a chance encounter with a stranger at Atlanta airport, and from that point on, he endures hell, for an aspiring actor named Ethan Tremblay (Zach Galifianakis) makes sure of that. They both get thrown out of a plane and land in the no-fly list. Peter then has to figure out how to get to L.A. before his pregnant wife gives birth; without his wallet, he finds himself with no credit cards, no ID and no money, so he takes Ethan’s offer to ride with him, since he is going to Hollywood to interview with an acting agent. Little did both know they were in for a one-of-a-kind adventure.

My God, I had so much fun watching this movie. Downey Jr. is hysterical, while Galifianakis is both emotional and crazy at the same time. The combination of both is an explosive cocktail of laughter! The movie’s humor is similar to The Hangover, and the film seems to be directed towards the same audience, which is guys, none of which bothered me in the least. Sonny, Ethan’s dog, fits in the story like another guy; the only thing he didn’t do was talk.

I hope this pair of actors reunites at least once more for another hit. I would surely appreciate it as long as the script delivers a good punch.
2010 movies bromances movies reviews Robert Downey Jr Zach Galifianakis