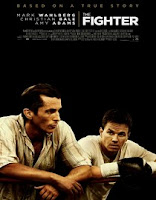 Mickey Ward (Mark Wahlberg) is a boxer who is running out of time to make a name for himself due to his age. His mother (Melissa Leo) is his manager, and his half brother Dicky (Christian Bale) is his trainer, but Dicky is fighting a drug addiction and he is always late for engagements. When escaping from the police for fraud and for impersonating an officer, Dicky resists arrests and is sent to jail, which turns out to be Mickey’s blessing because for the first time in his boxing career he has a chance to be the fighter he wants to be, without the interference of his mother and family.

I did not like the “old” feel of the movie: it is somewhat dark, almost hazy as a film ten or twenty years older. I did like that the first part of the movie focused on the family dynamics; I got to know who was who and how that person fit in the story. The second part of the movie was about the development of Mickey as a boxer, once he started winning fights until his ultimate fight where he became the welterweight champion of the world.

Mark Wahlberg’s performance is good, but not too different from others he has done. The most notable performances in the film are those of the supporting characters interpreted by Amy Adams as Charlene, Mickey’s girlfriend, Melissa Leo as Mickey and Dicky’s mother, and especially Christian Bale’s who truly shines both as a drug addict and as a trouble maker wishing for a comeback. The boxing scenes are not only credible but exciting as well.