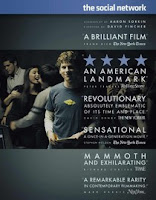 Jesse Eisenberg stars as Mark Zuckerberg, Facebook CEO, starting from his days as a Harvard student to the rise of his enterprise as a multimillion dollar business that has changed the way we communicate, for better or worse. The movie focuses on the dynamics of the founding team, namely Zuckerberg and Eduardo Saverin (Andrew Garfield), Facebook CFO, whose friendship dissolved once Facebook started getting injections of venture capital. Aside from chronicling the creation of Facebook, at the heart of this film are two of the lawsuits that Mark Zuckerberg faced in the early days.

I experienced many emotions watching this film, and none of them were good. I am going to refrain from voicing the opinion I formed about the characters. On Saturday Night Live, Mark Zuckerberg said that the movie was “interesting”. Hmmm…I wonder what he meant.
2010 movies Jesse Eisenberg movies reviews