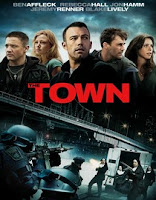 Doug MacRay (Ben Affleck) is the mastermind of his small crew of bank and truck robbers in Boston’s neighborhood of Charlestown. During a bank holdup, Jim Coughlin (Jeremy Renner), Doug’s best friend, decides to take the bank manager as a hostage, to free her later when it appears that police are not following them. Jim takes away her driver’s license, later to discover that they live in the same neighborhood; so Jim decides to take the matter in his own hands before it becomes an issue, but Doug intervenes.

Doug approaches Claire (Rebecca Hall), the bank manager, and starts a casual friendship that eventually becomes a relationship; but when he falls in love with Claire and decides to leave the pilfering behind, Jim and a character known as “the florist” resort to coercion to make Doug change his mind.

This movie is superbly directed by Ben Affleck. He also co-wrote the script. The acting is flawless, despite having few stars in the cast. The musical score helps to enhance the drama. The pace is fast, but not so much to make you dizzy or confused; it is easy to keep up. What I like the most about this movie is its no-nonsense style; there are no perfect robberies, real life is messy and plans seldom unfold as they’re conceived. That, I think, is the true value of this film.
2010 movies Ben Affleck heist movies Jeremy Renner movies reviews Rebecca Hall