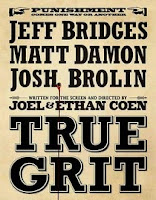 When Tom Chaney (Josh Brolin) kills Mattie Ross’ (Hailee Steinfeld) father--for 2 pieces of gold and a horse—fourteen year-old Mattie vows revenge. She posts a fifty dollars reward and hires U.S. Federal Marshal “Rooster” Cogburn (Jeff Bridges) to carry out the mission, except, she is coming along to ensure that her money is well spent and to see her father’s murderer dead or brought to justice. La Beef (Matt Damon), a Texas Ranger also hunting Chaney for the death of a Senator, joins the search party. Amidst disagreements and petty fights, they go on with a common goal in mind; despite the quarreling, they prevail due to Mattie’s determination to seek justice.

I had a hard time understanding most of the dialog (English is my second language in case you haven’t noticed), but from what I could discern, I realized that despite the grit, the movie was funny at times, if only briefly. The scenography was breathtaking; I particularly enjoyed the scene at night when it was snowing and Cogburn was carrying Mattie in his arms (very poetic!) I think that Jeff Bridges did a great performance in this film as an alcoholic lawman, and so did Matt Damon, but no doubt the most gracious and vibrant performance in this film is Hailee Steinfeld’s as Mattie. It will be a delight to see her grow into other roles.
2010 movies Coen brothers Hailee Steinfeld Jeff Bridges Josh Brolin Matt Damon movies reviews