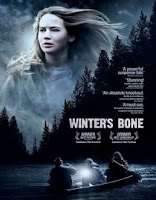 Seventeen year-old Ree Dolly (Jennifer Lawrence) takes care of her sick mother and younger siblings Ashley and Sonny. Jessup Dolly, Ree's father, is wanted by the police and has tied up the family house to his bond, so if he doesn’t keep his court date, they’ll lose their house. Ree promises a law enforcement officer that she will find her father and force him to go to court, that is, if she can find him.

Ree lives in a fairly small community--most of them family-- but no one is talking; though they all seem to know something about the Jessup’s whereabouts. Ree then has to rattle cages and in the process, gets herself beaten up. Her uncle Teardrop comes to her rescue, and with his help, Ree finds out that someone has killed her father for snitching. The last thing she has to do is to present proof of her father’s death to keep their property intact.

I did not like this movie one bit. I mean, the acting is good, but there are so many crooks! I never saw so many dirty faces and ugly attitudes in a movie before. The story is good, though the pace is slow. Not one of last year’s best films.
2010 movies indie movies Jennifer Lawrence movies reviews