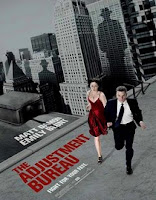 The Adjustment Bureau is the agency in charge of correcting the mistakes people make along their lives, which cause them to deviate from the master plan set up for them from birth. The “case officers” are the hat-wearing men making sure that there are as few ripples as possible when correcting a course. The “Chairman” is a Higher power in control of people’s destinies.

David Norris (Matt Damon) is the youngest person running for U.S. Senate in American history. He is leading the polls in the race for a seat from the state of New York. When the New York Post publishes a picture of him mooning his classmates at a Class Reunion, his Senate race is over. His concession speech on Election Day, inspired by a young, beautiful woman (Emily Blunt) he meets in the bathroom, marks his political revival. Months later, David’s “case worker” in The Adjustment Bureau is supposed, unbeknownst to him, to make sure David spills his cup of coffee on his clothes, thus missing his bus to work. By missing the bus, he would have avoided meeting the same woman again. David’s “case worker” is momentarily distracted and David takes the bus. In it, he sees the young woman, named Elise, who gives him his phone number written on the back of a card. Unfortunately, the ever present officers of TAB get hold of him and rattle his cage, also burning the card with Elise’s phone number. They threaten David with erasing his memory if he ever tells anyone about them.

Three years later, while riding a bus to work, David sees Elise in the street quite by chance. He leaves the bus and pursues her until she answers. They start a relationship, but guess who intrudes again? You guessed it, TAB. According to TAB, both lives won’t be the same if they stay together, but love proves that a master plan is useless when there’s the will to love.

I had a great time watching this movie; it is creative, imaginative, sexy and fun. This is how Inception should have been. Matt Damon never looked sexier, and he is totally believable as a young and charismatic politician. Emily Blunt is charming and beautiful. The movie is fast paced, and the musical score is sometimes dreadful (when TAB officers appear) and at other times it is ethereal. The case officers of TAB are very credible; they are men on a mission.

I wish there were more movies like this one. This is a romantic movie with a dark side that I loved.
2011 movies Emily Blunt Matt Damon movies reviews romantic movies sci-fi movies