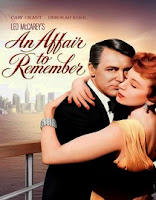 Nickie Ferrante (Cary Grant) is soon to marry an heiress. Terry McKay (Deborah Kerr), formerly a cabaret singer, has lived with her wealthy boyfriend for five years. When Nickie and Terry meet in a cruise on their way to Europe, they fall in love. They promise to each other that, if they can make a living in that time, they will meet again in six months and will get married. However, the day of their meeting tragedy strikes and changes the course of Nickie and Terry’s relationship.

The ending of this movie is so poignant it made me cry, and most movies don’t have that effect on me. I liked the acting and the singing, particularly the song “An Affair to Remember”, sweetly interpreted by Deborah Kerr. There is a great chemistry between the main characters, and the romance is not corny, which make the film adorable.
award-winning movies Cary Grant classic romances Deborah Kerr movies reviews