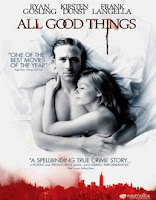 David Marks (Ryan Gosling) is a real estate heir who has lived a life of privilege, but has also grown picking up the pieces left by a family tragedy he witnessed when he was a child. In a story that spans three decades, young David meets Katie McCarthy (Kirsten Dunst) and they get married. David and Katie decide to leave the city for a quiet country setting, until his father, Sanford Marks (Frank Langella), intrudes and offers him to work for him, something David had promised himself he would never do.

Married life is perfect for the first few years, but little by little the situation deteriorates until one day Katie vanishes. Twenty years later, the case of her disappearance is reopened and bodies of people close to David and the case start to pile up making him the prime suspect.

This movie should have been better titled as All Good Things

(Must Come to an End). In an understated way this film packs quite a punch. I didn’t know what to expect from it. I like Ryan Gosling; he has delivered astounding performances in The Notebook

, so I said, let me watch this one, but…WOW. In this motion picture Ryan Gosling has simply stepped up to another acting level. I’m sorry he was not considered for an Oscar for this role. Not only Gosling is excellent in his role, so are Frank Langella (as expected) and Kirsten Dunst, who just became an acting star.

On one hand, Frank Langella’s Frost vs. Nixon’s role just blew my mind away. On the other hand, Kirsten Dunst had not been able to impress me much until now; her Spiderman

days were just cute, but in All Good Things she REALLY ACTS.

In this film the music tells as much of a story as the plot itself. Since the account begins in the 1970’s, there’s disco music, but the recurring theme is the one letting you know that ominous things are coming this way, and oh, my…