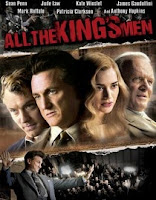 A Southern, populist politician wins the election for Governor, but behind closed doors he is just as underhanded as the politicians he defeated.

In All the King’s Men star Kate Winslet (The Reader, Titanic), Sean Penn (Mystic River, Milk), Jude Law (Alfie, Cold Mountain) and Mark Ruffalo (Zodiac, 13 Going on 30). Patricia Clarkson and James Gandolfini (Sopranos) co-star. If you ever want to know the end of every populist politician and every violent revolution, then this movie is made for you. If you think that the world is all good, then don’t see it because you won’t get it! Most violent revolutions end up destroying the very ideals they said to defend, just as every populist politician says exactly what people want to hear. That is exactly the topic of this movie, brilliantly accomplished by a star-studded cast.
Anthony Hopkins James Gandolfini Jude Law Kate Winslet Mark Ruffalo movies reviews Patricia Clarkson Sean Penn