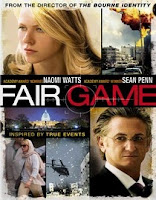 When former U.S. Ambassador Joseph Wilson (Sean Penn) wrote an article in the NY Times challenging Bush administration’s rationale for declaring war on Iraq, he didn’t anticipate what would lay ahead for him and his family, for administration officials reciprocated by leaking to the press the fact that Valerie Plame Wilson (Naomi Watts), the Ambassador’s wife, was a CIA agent. Since her covert status was blown, and her husband was at war with the White House, the CIA fired her. Her ongoing operations throughout the Middle East got suspended or reassigned. The unwavering apparitions of Joseph Wilson in the media, despite provocations and attacks, concluded in a congressional investigation and the indictment of Scooter Libby as the person responsible for the unlawful leakage.

This searing, political drama based on Valerie Plame’s memoirs

, was directed by Doug Liman (The Bourne Identity)

. I wasn’t expecting a good movie, despite its good premise, but this film grabs you by the neck and doesn’t let go until the end. There is a good chemistry between Naomi Watts and Sean Penn that makes the film even more satisfying; they previously worked together in 21 Grams

The psychosis, typical of people fighting events bigger than themselves, is not present in this movie, just the will to see their version of the truth prevail. No matter what side of the story one believes, it is evident that Valerie Plame and former Ambassador Wilson have made a good case.
Fair Game