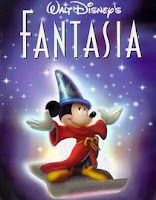 Fantasia is a fusion of classical music and animation, where the characters dance away at the sound of music. The Philadelphia Orchestra interprets pieces such as Igor Stravinsky’s The Rite of Spring, which in this film depicts the origin and evolution of life on Earth up to the disappearance of the dinosaurs. The Sorcerer’s Apprentice shows Mickey Mouse as the apprentice who wears his master’s hat and causes chaos. During Tchaikovsky’s Nutcracker Suite, fairies and fallen leaves dance away to the tune, while the seasons go by. During Beethoven’s Pastoral, fauns, centaurs and Pegasus party in Mount Olympus.

I enjoyed this motion picture very much. I liked the coordination of the animated characters with the music I’m so fond of. This is a true classic!
Fantasia (Special 60th Anniversary Edition)