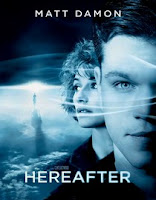 Marie LeLay (Cécile De France) is a re-known French journalist in her last day of vacation when a tsunami strikes. Marcus is a young boy (Frankie and George McLaren) who has been struck by a family tragedy. George Lonegan (Matt Damon) is a gifted psychic refusing to acknowledge his gift (or curse as he calls it). These three characters’ paths will cross in the streets of London.

This movie has been directed and produced by Clint Eastwood. The music is also his. The musical score that appear in most of his films (haunting guitar chords, piano and violin) are ever present. As always, shadows engulf the characters to enhance the drama.

Although haunting, this movie is unlike other films that Clint Eastwood has directed. It doesn’t have the same resonance as Million Dollar Baby, Unforgiven, Changeling and Gran Torino. However, its main topic, what happens after death, is explored with care even if no definitive answers are provided.

I liked this film more than my rating reflects. The acting is superb by characters big and small.

Matt Damon has departed somewhat lately from the type of films that have given him commercial stardom such as The Bourne Trilogy and The Ocean’s Trilogy. Those action flicks focus more on his ability to fight or being at the edge of the law. In his last two movies (Hereafter and The Adjustment Bureau), however, he explores his most dramatic essence, and he excels at it. I believe Matt Damon is one of the most versatile actors of his generation, and this movie is proof of that.
2010 movies Cécile De France Clint Eastwood Matt Damon movies reviews