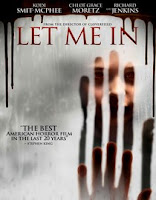 Twelve year-old Owen (Kodi Smit-McPhee) lives in an apartment complex surrounded by adults, that is, until twelve year-old Abby (Chloe Moretz) moves in, accompanied by a man. Abby warns Owen early on that they cannot be friends, but an unlikely bond is progressively formed when Owen shares his toys, favorite snacks and eventually a school secret (he is constantly bullied by three classmates). Abby cannot share her secrets because they are otherworldly, but advises Owen to stand up to his bullies and teach them a lesson they may not forget.

This is the American adaptation of the Swedish film Let the Right One In, which I reviewed under the title Favorite Foreign Movies – Part III. All the elements of the story are preserved in this version, but to be honest, I prefer the original Swedish film; it is much more poetic, more captivating, haunting. This movie has been released after the vampire frenzy that has overtaken the worldwide market. The vampire hype does no good to this motion picture, which focuses more on the blooming friendship of two pre-teens, without the aspirations to join their love lives forever after. This film is about friendship, loyalty and standing up for oneself and those one holds dear.