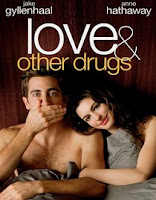 Jamie Randall (Jake Gyllenhaal), a pharmaceutical representative, is given the task of convincing doctors to prescribe Zoloft instead of Prozac. He resorts to underhanded tactics to get his way. In a doctor’s office he meets Maggie Murdock (Anne Hathaway), a twenty-six year-old patient with Parkinson disease. Soon enough, Jamie and Maggie are attracted to each other and start having casual sex fairly often, until…They fall in love. All the while, the pharma company Jamie works for introduces Viagra to the market and the entire medical community goes wild for it, making Jamie a very popular guy.

I thought this movie was OK. The acting was good, but diluted by too much sex and profanity. They should have explored the Parkinson angle further, make characters more human; instead the story seemed rushed. The ending was good, though predictable considering this was a romantic comedy. I liked Jake Gyllenhaal in this role. I thought that Anne Hathaway was much better in Rachel Getting Married, and she accomplished it without getting naked.
2010 movies Anne Hathaway Jake Gyllenhaal movies reviews romantic comedies