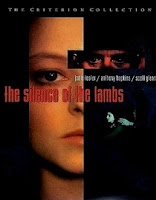 This movie is an Anthony Hopkins’ masterpiece for which he won an Oscar in the Best Actor category. In it he stars as Hannibal Lecter, a psychiatrist with cannibalistic instincts. Young FBI trainee Clarice Starling, Jodie Foster also in an Academy Award winning role, is summoned by her superiors to go to prison to pick Lecter’s brain regarding a case of young women’s corpses with missing patches of skin. The FBI has labeled this killer as Buffalo Bill, a former patient of Lecter. But Starling doesn’t know what she gets herself into, or better yet, she doesn’t have any choice for she isn’t the one running the show. Lecter kills and goes free while the clock is ticking to find the next victim before it’s too late.

Creepy but so worth it!