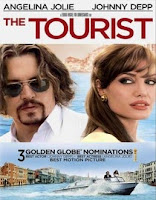 British belle Elise Ward (Angelina Jolie) is being tailed by British and French Police. She is the lover of Alexander Pearce, a British fugitive, guilty of embezzling millions of dollars. When Alexander Pearce summons Elise to a rendezvous in Venice, she is supposed to make police believe that a random man in the train is supposed to be him, so she chooses Frank (Johnny Depp), an American tourist on his way to a good time, or so he thinks. Frank is bedazzled by the British beauty; he can hardly believe his luck when Elise kisses him in the suite of a luxury hotel, but cold reality soon intrudes when Russian thugs try to kill him.

I think that this movie had the potential to be good, maybe not great, but at least really good. Unfortunately, the premise did not deliver despite its twisted ending. The shoots of Venice are simply amazing, and Angelina dazzles in beautiful dresses and even more gorgeous jewels, but that’s about it. The chemistry between Jolie and Depp in non-existent, which I believe is a consequence of the rumors generated by the pairing of these two. It’s a pity that these actors, who have prominent careers on their own, didn’t know how to make this movie work.
The Tourist