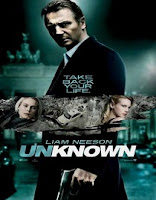 Liam Neeson (Taken, Schindler’s List) stars as Dr. Martin Harris, a scientist visiting Berlin, accompanied by his wife Liz–interpreted by January Jones (Mad Men)—where he is supposed to attend a biotechnology conference. Dr. Harris accidentally leaves behind a suitcase at the airport and he only finds out when he is at the entrance of the hotel. He decides to take a cab back and claim his luggage. Unfortunately, he suffers an accident on his way to the airport and falls into a comma for four days. When Dr. Harris wakes up, he only remembers scattered images from his life, but without any documents in his possession, he cannot prove he is who he claims to be.

Dr. Harris is released from the hospital and returns to the hotel where he and his wife are supposed to be staying. Upon finding his wife at a reception, he realizes that she doesn’t recognize him, and worse yet, another man claiming to be him is posing as her husband. With the help of a private investigator—a former Stasi member—named Jorgen (Bruno Ganz, Downfall) and the female cab driver who saved his life in the accident (Diane Kruger, Inglorious Basterds), Dr. Harris has to find proof of his existence.

For most of the movie is unclear why two assassins are chasing Dr. Harris around Berlin. One only suspects that it may be related to the contents of the suitcase left behind. The acting is good and the pace is fast, so there’s no boredom despite one being kept in the dark for most of the film. My suspicions about the plot turned out to be wrong by a long shot, but the actual story turned out to be somewhat silly.

Too much mystery and car chases do not a good movie make.