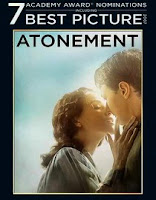 ), are in love but have been avoiding each other’s company for the last few years. Then Robbie decides to go away to medical school and Cecilia is mad about it. When 13-year-old Briony (Saoirse Ronan, The Lovely Bones

), Cecilia’s younger sister, reads a steamy love letter that Robbie sent to Cecilia and then witnesses a sexual encounter between them, she believes Robbie capable of terrible things and guilty of a violent crime. Briony’s accusation will forever change the course of their lives.

I wanted to review this movie since I started this blog. I have seen it three times and every time it ends, I experience the same shock and emotions inherent to the story. The screenplay wouldn’t be as powerful without the wonderful acting of McAvoy, Knightley, Ronan, and later on of Romola Garai, as the young Briony and of Vanessa Redgrave, as the older Briony. The war images are much more graphic than many war movies I have seen, and I dare to say raise the bar for the sin Briony must atone.