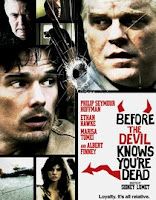 Andy Hanson (Philip Seymour Hoffman, Capote) is a real estate executive with a heroin addiction and money troubles. Hank (Ethan Hawke, Training Day), Andy’s younger brother, also has pressing problems due to an overdue child support pension and the constant nagging of his ex-wife. When Andy proposes Hank to carry out a “job” that will solve their money troubles, Hank hesitantly signs in; little does he know that the job entails to rob their parents jewelry store in the suburbs. When Andy refuses to take physical part in the robbery, Hank brings along a friend, and from then on everything goes horribly wrong.

This is one powerful drama; it is gritty, it is dark and it is violent, but to the psyche. I have seen many good movies in my life, and this is certainly one of them. The direction by Sidney Lumet is superb and so is the acting by characters big and small. Seymour Hoffman’s performance is mind blowing, and so is Hawke’s, who usually gets those roles of the good, naïve guy who has no clue of why things happen the way they do; well, in this movie his role and attitude are perfect. Marisa Tomei (The Wrestler) is Gina, Andy’s unfaithful wife, who has hope of her husband caring even a little for her and her indiscretion. The sorrow portrayed by Albert Finney (Erin Brockovich), Andy and Hank’s father, is so believable…

A solid screenplay and pace make this movie a roller coaster of emotions. This is not a linear story; the movie is populated by flashbacks from each key character’s point of view. This movie will have so much resonance with you that will never forget you saw it. This film is for mature audiences due to graphic sex, nudity and thematic content such as drug use.
Ethan Hawke indie movies Marisa Tomei movies reviews Philip Seymour Hoffman Sidney Lumet