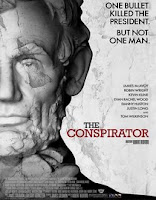 ), recounts the events leading to the assassination of President Abraham Lincoln by Confederate sympathizers, and the ensuing investigation to capture and bring to justice “all” the participants involved in the conspiracy.

), a young lawyer and Union Army captain during the Civil War, is entrusted by a Maryland Senator (Tom Wilkinson, Michael Clayton

), a woman who had run the boarding house where most of the conspirators met and plotted Lincoln’s assassination. Mary’s fate seems to be predetermined considering the public’s condemnation of the events and the Secretary of War’s (Kevin Kline, Dave

) desire to set an example out of her to heal the nation. The trial takes place before a military tribunal, which seems inclined to condemn her from the beginning despite inconsistent testimonies suggesting that she may be innocent.

Despite not being an unforgettable movie, I thought this one was very good. The cast delivers wonderful performances, though it’s hard to care for most of the characters. The outcome of the trial was ironic--regarding Mary Surratt-- compared to the revelations made at the end of the film, which made the words of the prosecutor ring true: “In times of war, justice is silent.”
2011 movies Abraham Lincoln James McAvoy Kevin Kline Mary Surratt movies reviews Robin Wright Penn Tom Wilkinson