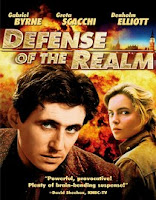 A British MP is forced to resign after being exposed by the press in a scandal concerning his mistress, a call girl with links to the KGB and an alleged Soviet spy. After a fellow journalist dies from a suspicious heart attack, Nick Mullen (Gabriel Byrne, The Usual Suspects) gets involved in the story and discovers surprising events covered up by the highest spheres of the British government.

The plot of this political thriller is engaging, and despite the audience not knowing where the investigation is headed or how the dots are connected, one is a hostage of the screenplay for it is very good. The end is deeply satisfying after all the digging, but the movie has current resonance regarding issues of freedom of the press and national security regardless of the country where the story is based.
espionage thrillers Gabriel Byrne movies reviews