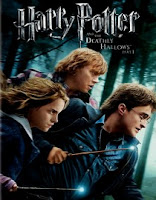 , Harry (Daniel Radcliffe), Hermione (Emma Watson) and Ron (Rupert Grint) leave Hogwarts and embark on a quest to find the Horcruxes in which Lord Voldemort has hidden part of his soul. They revisit places from Hermione’s childhood, trying to escape the grip that Voldemort allies have in the Ministry of Magic.

Most of the characters that we’ve come to know are in this movie, but some like Severus Snape (Alan Rickman), Voldemort (Ralph Fiennes), Bellatrix (Helena Bonham Carter), and the Weasleys only get minutes, if not seconds of screen time. Hermione is still the one brainy third of the pack, and that comes very handy considering they have no clues of where to find the Horcruxes. Ron also gets less screen time due to him seemingly abandoning Harry and Hermione on their quest.

What I never liked too much about this franchise is that each movie has gotten increasingly darker in tone than its predecessor, but I guess it’s understandable considering its targeted audience has matured along with the main characters. However, being dark in tone seems to be one of the strengths of this franchise, making it appealing to a wider audience. Part I, though incomplete, sets the pace perfectly for which, in my opinion, will be an unforgettable conclusion.
2010 movies Harry Potter Franchise movies reviews Sci-Fi Fantasy movies