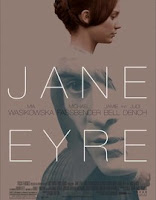 ) grows up in a boarding house until she is old enough to procure a job. With her fine education, Jane becomes the governess at Thornfield, whose owner, Mr. Edward Rochester (Michael Fassbender, Inglorious Basterds

) falls in love with her, only he has a terrible secret. On Jane and Rochester’s wedding day, some truths are revealed, which drive Jane away from Thornfield.

; I rated that movie 5 stars. I also liked this Cary Fukunaga’s version. This film is dark, which normally characterizes period pieces, but it suits the mood of this movie rather well. Here there is a powerful secret, hidden in plain sight, protected by the house’s employees, so the darkness works like a metaphor. The music is ethereal. I enjoyed the spring romance (also a metaphor), and the chemistry between Wasikowska and Fassbender, which is undeniable.

I should remark that Mia Wasikowska’s performance really impressed me. Her Jane Eyre is a quiet, driven performance, a strong willed woman who has been through much and it’s not afraid of showing it. Bravo, Mia!
2011 movies Mia Wasikowska Michael Fassbender movies reviews romantic movies