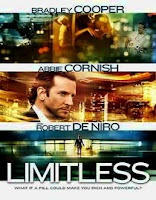 Edward Morra (Bradley Cooper, The Hangover) discovers endless possibilities when he takes an experimental drug that taps 100% of the brain’s potential. The catch is that he has been given only one pill. The next time he meets his supplier to get more, he runs into a murder scene. The pill has devastating side effects, but who cares! With the help of the drug, Edward writes a book in four days, learns several languages in less than a month, and becomes a financial guru. However, other users of the drug become an issue for Eddie when they make clear that they are willing to commit murder unless they can get a steady supply of the miraculous drug.

The camera work in this movie is very dynamic; so much so that it’s almost dizzying. I liked the different hues things would get depending if a character had taken the drug or not. I also enjoyed the script; it’s a very interesting story. The acting is good across the board; Abbie Cornish (Sucker Punch) and Robert De Niro also co-star.
Abbie Cornish action thrillers Bradley Cooper movies reviews Robert De Niro