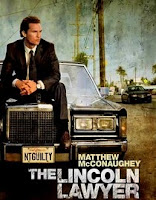 ) secures his services. Roulet is being accused of assault to a prostitute, and claims he is innocent. When clues begin to pop up suggesting quite the opposite, Mick has to rethink his strategy to deal with Roulet and the case.

This is the battle of the beautiful. McConaughey and Phillippe are, and so is Josh Lucas (Life as We Know It

), as the prosecutor, and Marisa Tomei (In the Bedroom

This movie is intense almost from beginning to end. There are very few things more exciting than courtroom drama, and this film is deeply satisfying in that sense. I really liked the 360 degrees view of Haller in the courtroom. McConaughey plays one of his most solid performances and so does Phyllippe. William H. Macy owns his small role and Marisa Tomei is delightful as the ex-wife. The good chemistry was evident in the cast.